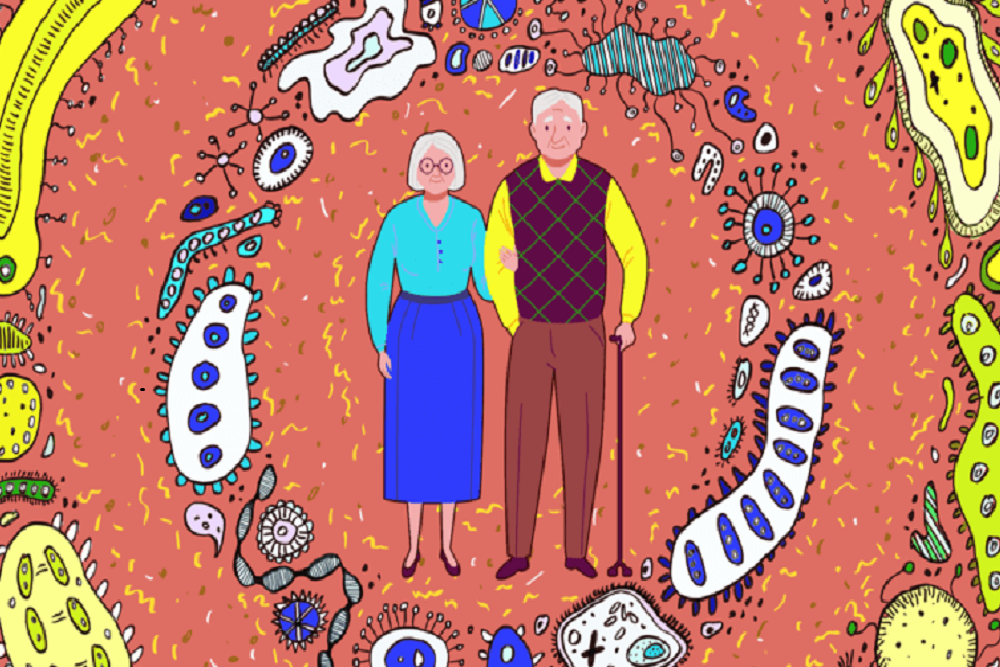 The gut microbiome is an integral component of the body, but its importance in the human aging process is unclear. ISB researchers and their collaborators have identified distinct signatures in the gut microbiome that are associated with either unhealthy or healthy aging trajectories, which in turn predict survival in a population of older individuals. The work was just published in the journal Nature Metabolism.

The research team analyzed gut microbiome, phenotypic and clinical data from over 9,000 people – between the ages of 18 and 101 years old – across three independent cohorts. The team focused, in particular, on longitudinal data from a cohort of over 900 community-dwelling older individuals (78-98 years old), allowing them to track health and survival outcomes.

The data showed that gut microbiomes became increasingly unique (i.e. increasingly divergent from others) as individuals aged, starting in mid-to-late adulthood, which corresponded with a steady decline in the abundance of core bacterial genera (e.g. Bacteroides) that tend to be shared across humans.

Strikingly, while microbiomes became increasingly unique to each individual in healthy aging, the metabolic functions the microbiomes were carrying out shared common traits. This gut uniqueness signature was highly correlated with several microbially-derived metabolites in blood plasma, including one – tryptophan-derived indole – that has previously been shown to extend lifespan in mice. Blood levels of another metabolite – phenylacetylglutamine – showed the strongest association with uniqueness, and prior work has shown that this metabolite is indeed highly elevated in the blood of centenarians.

“Interestingly, this uniqueness pattern appears to start in mid-life – 40-50 years old – and is associated with a clear blood metabolomic signature, suggesting that these microbiome changes may not simply be diagnostic of healthy aging, but that they may also contribute directly to health as we age,” Wilmanski said. For example, indoles are known to reduce inflammation in the gut, and chronic inflammation is thought to be a major driver in the progression of aging-related morbidities.

“Prior results in microbiome-aging research appear inconsistent, with some reports showing a decline in core gut genera in centenarian populations, while others show relative stability of the microbiome up until the onset of aging-related declines in health,” said microbiome specialist Dr. Sean Gibbons, co-corresponding author of the paper. “Our work, which is the first to incorporate a detailed analysis of health and survival, may resolve these inconsistencies. Specifically, we show two distinct aging trajectories: 1) a decline in core microbes and an accompanying rise in uniqueness in healthier individuals, consistent with prior results in community-dwelling centenarians, and 2) the maintenance of core microbes in less healthy individuals.”